Having devoted his career to the research and data analysis of global tropospheric ozone, Dr. Jack Fishman, Professor of the Department of Earth & Atmospheric Sciences and Director of the Center for Environmental Sciences at Saint Louis University, is the man behind St. Louis’ Ozone Garden Project. Working alongside the Saint Louis Science Center and the Missouri Botanical Garden, Fishman’s mission is to educate the public on the toxic effects of rising ozone pollution on plant species. 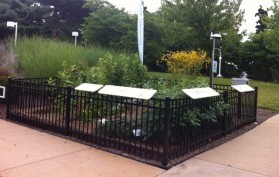 Since the onset of the industrial revolution, ozone levels emitted by the combustion of fossil fuels have more than doubled in the lowest layer of the Earth’s atmosphere, known as troposphere. Today, as background concentrations of ozone pollutants continue to rise, ozone pollution is not only creating health concerns for humans, but is also causing vegetation damage and declines in crop productivity.

“The ozone garden idea was first used by the National Park Service,” said Fishman whose 40- year research career has focused on looking at ozone as a pollutant. “Unfortunately, for a very long time, most people weren’t aware of the potentially harmful effects of ozone, even at levels that are considered ‘background’ concentrations. As a result, the ozone gardens became a living display of the effects of ozone pollution on the biosphere.”

In the St. Louis area, Fishman’s efforts have resulted in the creation and maintenance of three established ozone gardens, which are located at the Saint Louis Science Center’s McDonnell Planetarium, Grant’s Farm and Southwestern Illinois College in Belleville, Ill. It is likely that two more gardens will be grown by 2016 – one at the Missouri Botanical Garden and another in Granite City, Ill. Nationally, more than a dozen Ozone Gardens have been planted that have used seeds, plants, and guidance from the St. Louis project.

The gardens feature bio-indicator plants with leaves that display damage when ozone pollution levels are high, but still below levels for which pollution alerts are issued. During the spring and summer months, Saint Louis University staff and student volunteers are responsible for inspecting the plants and collecting leaf damage data.

Each of the gardens also contains a weather station and an ozone (O3) monitor, which records air quality conditions every 15 minutes and transmits the data collected to a receiver online. The monitoring equipment is connected to the Global Ozone (GO3) Project, which provides institutions worldwide with the ability to upload their pollutant information to a public database for graphing and display on Google Earth. This data is publicly available through the GO3 website at http://go3project.com/network2/index.php/pages/ozone-data.

“We have seen tremendous improvement in the U.S. and Europe as we start to create a global trend of pollution control,” said Fishman. “As a result, the very high urban pollution levels found before the implementation of the Clean Air Act in 1970 are no longer found. On the other hand, global levels in the non-urban atmosphere are still increasing and are linked to the increased use of fossil fuels. It is a complicated problem that generally is not understood by the public. But the bottom line is that we need to think globally and act locally. It starts with reducing our carbon footprint and finding alternative ways to create energy.”

At an individual level, there are a variety of things we can all do to help reduce the emissions that lead to poor air quality. These actions include driving less by carpooling and vanpooling, using mass transit, and walking and biking when possible to get around town. Efforts to conserve energy at home and at work can also play an important role in reducing demands on power plants and the related emissions they create.

To learn more about the St. Louis Ozone gardens, visit http://www.slu.edu/department-of-earth-and-atmospheric-sciences-home/center-for-environmental-sciences/ozone-garden-home. For information on steps you can take to help reduce the emissions that lead to ozone pollution, visit The St. Louis Regional Clean Air Partnership’s website at www.cleanair-stlouis.com, find the organization on Facebook, or follow the organization on Twitter @gatewaycleanair.

Dr. Jack Fishman’s work on the St. Louis Ozone Garden Project is just one highlight of his distinguished career, which includes 31 years with the NASA Langley Research Center, where he was a Senior Research Scientist and Branch Head. During his time at NASA, he studied tropospheric chemistry, and pioneered the use of satellite observations that provided an eye-opening perspective of the extent of global pollution. After retiring from NASA, Fishman joined the Saint Louis University faculty as a Professor in the Department of Earth & Atmospheric Sciences and was subsequently appointed Director of the Center for Environmental Sciences. The first Ozone Garden was planted in 2012.