Transportation is one of the biggest contributors to air pollution. In conjunction with the start of the Clean Air Partnership’s daily air quality forecasting season, more than half a dozen partners, who collectively provide an array of transportation options that extend beyond driving in single-occupancy vehicles along with resources and incentives for doing so, joined forces to launch a “Don’t Pollute. Switch Up Your Commute.” campaign. With increasing numbers of people heading back to their offices as we move beyond the COVID-19 pandemic, this summerlong effort will work to inform people the way they choose to travel impacts the quality of air St. Louis area residents breathe, while motivating them to modify commuting behaviors as often as they are able.

“The St. Louis region is no stranger to poor air quality conditions,” said Susannah Fuchs, Director of Clean Air for the American Lung Association in Missouri. “There is a lot of work to be done to protect our communities from the continued risks to public health resulting from high levels of ozone, particularly during the summer months. It’s very important that commuters stay informed about the air we breathe and continue to take voluntary steps to reduce emissions to help improve outcomes.”

Area residents can visit www.SwitchUpYourCommute.com to sign up to receive color-coded air quality forecasts, which provide daily updates via email or text stating if the forecast for the following day is a GREEN (good), YELLOW (moderate), ORANGE (unhealthy for sensitive groups) or RED (unhealthy) air quality day. The first 200 people to download the forecast will receive a free, STL-STYLE campaign t-shirt. From there, individuals are being encouraged to show they care about clean air by taking transit, carpooling, vanpooling, walking, biking or telecommuting as often as they can.

“The region is in a race for cleaner air and the campaign is two-fold,” added Kimberly Cella, Executive Director for Citizens for Modern Transit. “First, partners aim to educate. Then, as the summer heats up and the potential for poor air quality days to be forecasted increases, we want people to take action.”

When an ORANGE or RED air quality day is forecasted, those who signed up for the forecast will receive a text message asking if they plan to modify their commute the following day – and if so – how. These respondents – along with those who post a picture of themselves on Instagram, Facebook or Twitter taking transit, carpooling, vanpooling or telecommuting on a poor air quality day and include #SwitchUpYourCommute – will be entered to win a variety of prizes through the end of the air quality forecasting season.

The partners behind the “Don’t Pollute. Switch Up Your Commute.” campaign – which include Citizens for Modern Transit, the Clean Air Partnership, Commute with Enterprise, Madison County Transit District, Metro Transit, the Missouri Department of Transportation, RideFinders and St. Clair County Transit District – kicked-off the summerlong effort during the morning commute on Monday, May 2, 2022. Representatives were at various Metro Transit Centers and parking lots throughout the region handing out keychain coin pouches as well as educational materials. Throughout the summer, they will also be asking local businesses and organizations to join in this race for cleaner air by encouraging their employees and colleagues to take part in this campaign.

To learn more about the region’s air quality, transportation options, campaign efforts and how area businesses can get involved, visit www.SwitchUpYourCommute.com. 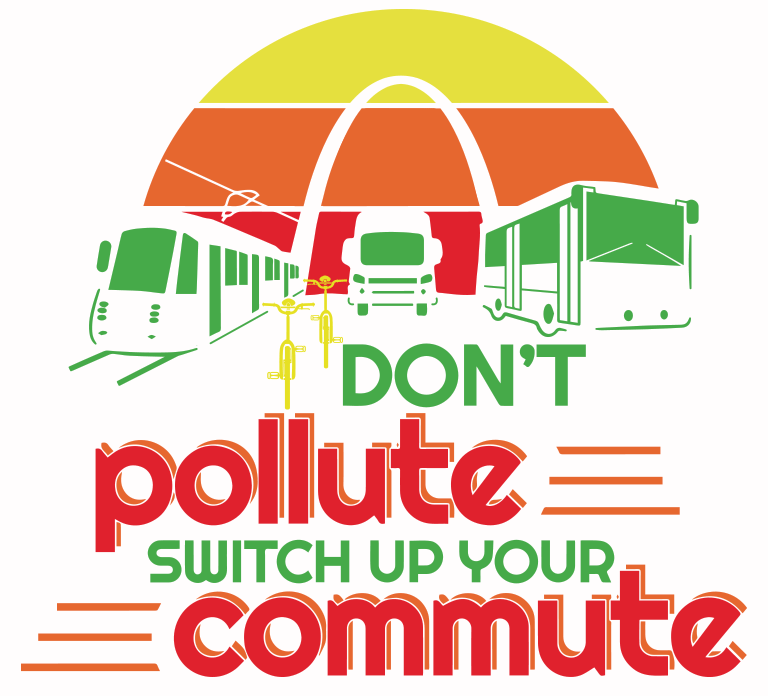